Pew: Facebook no longer most popular online platform among US teens

Facebook is no longer the most popular online platform among US teens, with more now claiming to use YouTube, Instagram and Snapchat, according to the Pew Research Center. 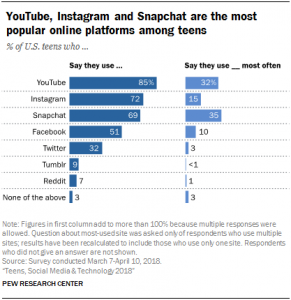 The ‘Teens, Social Media and Technology 2018’ report said that a shift in teens’ social media use is just one example of how the technology landscape for young people has evolved since Pew’s last teen technology survey in 2014-2015, with smartphone ownership now “nearly ubiquitous”.

In the 2014-15 survey, Facebook was found to be the only platform that was used by a clear majority of teens with 71% use versus 52% for Instagram and 41% for Snapchat. However, unlike this year’s survey, the previous study did not include YouTube.

In terms of the online platforms that teens use the most, today 35% said they visit Snapchat most often, 32% said YouTube, while 15% use Instagram the most. By comparison, just 10% of teens said Facebook is their most-used online platform, and even fewer cited Twitter, Reddit or Tumblr as the site they visit the most.

Currently, some 88% of US teens report having access to a desktop or laptop computer at home, while 84% say they have or have access to a games console at home. An even larger 90% say they play video games of some kind – be it on a computer, mobile phone or games console.

The survey featured interviews with 1,058 parents and have a teen ages 13 to 17, as well as interviews with 743 teens. The interviews took place online and by telephone from March 7 to April 10, 2018, and were conducted by NORC, a research institution based at the University of Chicago.