UK hybrid digital-terrestrial and IPTV platform YouView has unveiled the findings of analysis of viewer behaviour that reveals some surprises about the changing ways in which viewers are interacting with services. 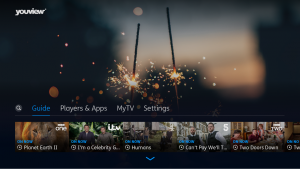 YouView has delivered eight billion streams of content since the rollout of the updated platform a year ago.

Some 73% of users have recorded content, but only half of these then go on to watch their recorded programme, with 46% watching the programme the same day.

YouView said that the platform was collecting 370 million anonymous data points a day, providing insights into how viewers use the YouView interface and how audiences discover and watch linear TV, PVR and on demand programming.

That data revealed, among other things, that over one in five UK viewers of UK public broadcaster Channel 4’s Great British Bake Off series had not seen the show when it aired on the BBC, while one in eight viewers of the first episode of BBC crime drama Hard Sun, all of the episodes of which were made available on the same day on iPlayer, went on to watch the entire series with seven days of the initial linear broadcast.

YouView’s analysis of user data showed that viewers who watch two episodes of a programme are more likely to get hooked and continue to watch the entire season. Series analysis shows that the vast majority of viewers watch the first episode of a programme on Live TV, but then tend to shift towards viewing in a combination of ways, the platform said.

Some 92% of views of season two of ITV’s Victoria watched it on live TV. By the eighth episode, only 15% of users watched the entire season live.

YouView also revealed that data shows much of video-on-demand viewing was planned rather than spontaneous.

When a YouView set top box is powered on, the three most common viewer behaviours are to tune to a live channel using the remote control, launch the guide to select a channel to watch or to watch recorded programmes.

However, 25% of all video on-demand launches happen in the first three minutes of a box launching, suggesting planned viewing behaviour rather than impulse viewing.

YouView also said that almost 40% of all digital terrestrial television channel tunes, lasting more than three minutes, are made via a YouView feature such as the Guide, Search or Discover, rising to 50% for IP channels.

“Looking ahead, aggregated data can be used to inform better content discovery across our platform and bring personalisation through machine learning. Dynamic ad insertion in linear TV moves into mainstream this year and we are already trialling an end to end solution backed by real time data. Working closely with both our broadcaster and telco shareholders, we are in a unique position to truly understand the demands and opportunities of the ever-changing TV landscape, and how to invest and innovate to meet those demands whilst informing the industry at large,” said YouView CEO Richard Halton.