The French subscription video-on-demand market remains underdeveloped compared with other European countries, both in its economic value and in its level of penetration, according to a study compiled by French media regulator the CSA and the Centre National du Cinéma et de l’Image Animée (CNC). 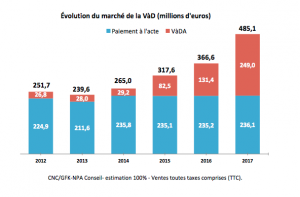 SVOD services represent 51% of the total value of the video-on-demand market. Growth in the transactional VOD business amounted to less than 5% in value between 2012-17, and has stagnated since 2014.

However, despite the strong growth in SVOD, said the report, the value of the overall market is very limited compared with the size of the linear TV business, which generated turnover of €3.3 billion in 2017.

The overall value of the French SVOD market in 2016 – €158 million citing Ampere Analysis and OEA data – put it in seventh place in Europe by value, behind market leader the UK on €804 million, Finland on €614 million and Germany on €540.5 million, as well as Sweden, Denmark and Norway. Among major advanced European markets, Spain and Italy were lower placed with €134.6 million and €99 million respectively. In terms of subscribers, France came third with 3.1 million, far behind the UK with 11.3 million and Germany with 10.2 million. The situation was even worse in terms of SVOD penetration, with France placed 15th among European countries with a penetration rate of only 10% in 2016.

According to the study, the main factors behind the slow growth of SVOD in France are the strength of free-to-air TV offerings and the success of tirple-play offerings provided by ISPs, which include television in the mix.

The report found that movies represented over half of the catalogue of the four main SVOD operators, with drama series and kids programming dominating episodic content. The study also found that growth in the number of films that are not distributed theatrically benefited Netflix, 45% of whose film catalogue comprises movies that are less than five years old.

Four out of five French SVOD services cater to niche audiences, focusing on specific genres such as manga, kids or music, and over half of SVOD services belong to a group active in TV production or distribution.

The report found that while growth in SVOD could have an impact on pay TV in France, there was little evidence of cord cutting to date, with most services viewed as complementary.

However, it said that taking on the might of US giants depended in part of the strategies of individual ators and pointed to the need for partnerships and further investment, and noted the failure to date of putative plans to create a European rival to Netflix.