ComReg: 42% of Irish homes have Netflix

More than two in five Irish households now use Netflix, according to research by Ireland’s Commission for Communications Regulation (ComReg). 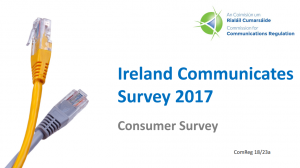 The 2017 Ireland Communicates survey, which was conducted in partnership with Ipsos MRBI, found that Netflix now has 42% uptake in Ireland, with the figure higher among younger people.

Despite the wide adoption of the streaming platform, Sky TV remained the top TV service in Ireland with 52% of households opting for the pay TV service.

Digital terrestrial TV service, Saorview, was the third most-popular TV service in Ireland and was used in 33% of homes. According to the report, half of households in rural areas use Saorview, compared with a quarter in urban areas.

Elsewhere, the study found that 29% of households currently have a smart TV and the majority (56%) expect to own one in five years’ time.

Among households with streaming services, 95% said they still watch live TV services while 44% said that the amount of live TV they view is unchanged.

The research is based on interviews with more than 1,500 Irish consumers and 500 small and medium-sized enterprises (SMEs). Participants were asked about their use and experiences of telecommunications in Ireland.