Virgin Media is offering customers a free upgrade to its high-end V6 set-top box in what it described as one of the largest customer upgrade programmes ever carried out in the UK. 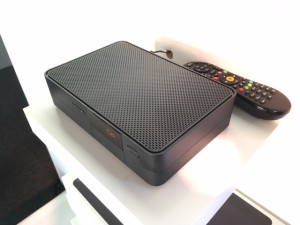 The V6 and remote

The V6 is Virgin’s premium 4K-ready set-top box that allows users to record up to six programmes while watching a seventh recording or stream.

Liberty Global-owed Virgin said the upgrade scheme will accelerate the device’s rollout and that it expects that the majority of its TV customers will have a V6 box by the end of the year. Currently one in four Virgin TV customers have a V6 box.

The move comes as Virgin said it had installed its millionth V6 TV customer, a little over a year after it first introduced the set-top box.

“Our customers tell us how much they love using the V6 box and watch more TV when they have one. As a central entertainment hub, fired by our superior ultrafast broadband, the V6 is built for apps and the best on-demand TV experience – whether its iPlayer, Netflix or thousands of box sets.”

Virgin claims that the V6 is ten-times as powerful as its previous TiVo set-top box, and said that customers with this device spend on average two hours longer each week watching TV and are more than twice as likely to watch a box set.

“This is great news for consumers and you have to give Virgin Media a lot of credit – until the launch of the V6 set-top-box, it was losing TV subscribers. Since its introduction, the box has turnaround its fortunes in a cut-throat market,” said Paolo Pescatore, vice president of multiplay and media at CCS Insight.

“Beyond the slew of features that the V6 box offers, Virgin Media is well positioned to aggregate all of the OTT video services that are rapidly emerging in the UK. With this in mind the company should be more aggressive in securing more content with OTT providers to further strengthen its overall offering and complement its extensive cable broadband network.”

Virgin customers who take a TV and broadband bundle will be able to upgrade their older set-top box for a V6 at no additional cost and with no re-contract requirements. Eligible customers will be contacted in the coming weeks with details of how they can upgrade.

Virgin Media unveiled its V6 box in November 2016 along with three new innovations – a download-to-own store, a kids app and an own-branded large-format table companion screen, dubbed the TellyTablet.

In March last year the operator revamped its internet bundles and claimed it was the first UK broadband provider to offer 100Mbps and above speeds “as standard”.