Netflix’s Stranger Things topped the chart of most ‘in-demand’ digital originals in Italy in the week to December 30, according to the latest analysis by Parrot Analytics.

Stranger Things continues to be a major talking point in EMEA markets, topping the list by significant margins in the five most recent markets for which Parrot Analytics provided data to DTVE – Spain, Denmark, the UAE, South Africa and now Italy. 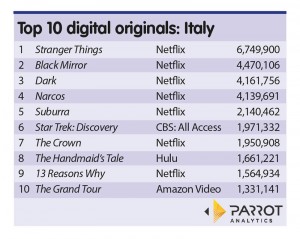 The series garnered almost 6.75 million ‘demand expressions’ in Italy in the week from December 24-30.

The Netflix-dominated top five saw Black Mirror take second slot with 4.47 million demand expressions, followed by Dark with 1.16 million. Narcos rounded off the most popular titles with 4.14 million, well ahead of fifth-placed Suburra – also from Netflix – with 2.14 million.

The remaining five titles in Parrot Analytics’ Italian top 10 for the week were CBS: All Access’s Star Trek: Discovery, streamed by Netflix internationally, Netflix’s The Crown, Hulu’s The Handmaid’s Tale – streamed on TIMVision in Italy – Netflix’s 13 Reasons Why and Amazon Video’s The Grand Tour.