The number of pay TV subscribers in Portugal grew by 33,000 in the third quarter to take the country’s total to 3.8 million, according to the latest statistics released by regulator ANACOM. 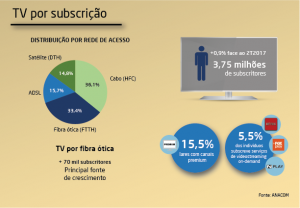 NOS has the biggest share of subscribers, with 43% of the total, followed by Meo with 38.1%, Vodafone with 14% and Nowo with 4.7%. Vodafone achieved the fastest growth in the quarter.

Growth in pay TV closely tracked growth in fibre broadband, which has grown by 27.3% year-on-year. Fibre is now the second most used distribution technology for pay TV after cable, with a 33.4% share of the total base of subscribers. Cable has a 36.1% share, while XDSL had 15.7% and satellite had 14.8%.

Some 93.6% of Portuguese pay TV subscribers take a multi-play package, up 8.2% year-on-year.

According to ANACOM, about 15.5% of homes with subscription television took a premium channel, while over three quarters received over 100 channels.

According to the regulator, about 5.5% of individuals aged 10 and over took a streaming on-demand service in Q3, up 2.3% year-on-year.