Programmatic digital display ad spend in the UK will reach some £3.39 billion by the end of 2017, up 23.5% year-on-year, according to eMarketer stats. 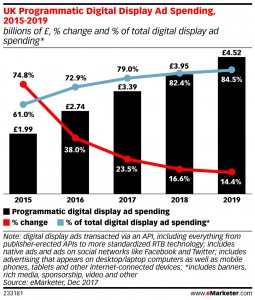 The research firm said that mobile continues to be a major growth driver and will account for 78% of total programmatic display ad spending in 2017 (£2.64 billion). This is tipped to reach 86.5% by 2019.

eMarketer told DTVE that it expects programmatic digital video ad spending to be some £967 million in the UK this year, climbing to £1.27 billion next year and £1.58 billion in 2019.

“Making everybody in the chain accountable is the next step in cleaning up programmatic’s image further,” said Fisher.

“For example, the recent Ads.txt initiative from IAB Tech Lab is one such step. This tool essentially allows publishers to publicly declare the companies they authorise to sell their digital inventory.”

“There will be more initiatives to come, and as they come online, greater levels of trust will be placed in trading digital display inventory via programmatic pipes.”