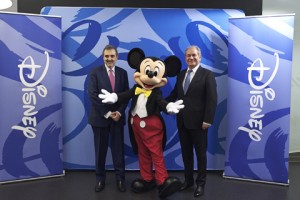 Spanish pay TV operator Movistar and Disney have struck a deal that will see a new channel – Movistar Disney – launch on the Movistar+ platform in December.

Movistar – the brand name for Telefónica’s consumer service – and Disney will create what is the second international service co-branded between Disney and a TV platform operator, the first being Sky Movies Disney in the UK.

The new channel, which will launch on December 22, will air recent movies including Frozen as well as library titles such as The Lion King, Fantasia, Pirates of the Caribbean and Malificent.

Movistar has also extended an existing agreement with Disney dating from 2015 to collaborate on bringing the Star Wars movie sequence to Movistar subscribers.

Luis Miguel Gilpérez, president of Telefónica España, said that the agreement would bring Disney content to its platform that its customers value. Fernando Jerez, director of flagship Movistar channel #0 and head of entertainment content at Movistar+, said that the new channel would complete Movistar’s family of services and enable it to offer exclusive content to subscribers.

Simon Amselem, head of The Walt Disney Company for Spain and Portugal, said that Disney considered Movistar a “key partner to bring our latest content to the Spanish public” and said this would be the first time that a single platform would carry such a wealth of Disney content in Spain. Amselem said that Movistar was one of the few platforms in the world that could deliver a proprietary Disney channel.