Ericsson ConsumerLab: half of all viewing to be on mobile, one in three to use VR 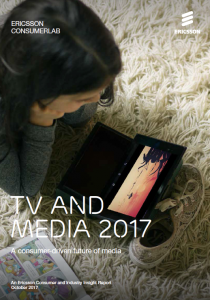 Half of all viewing will be on a mobile screen in three years, with half of this on smartphones alone, according to the latest ConsumerLab report from technology giant Ericsson.

The report also predicts that by 2020, one in three consumers will be Virtual Reality (VR) users, and that VR “will reignite the campfire experience of TV” thanks to the technology’s social and immersive capabilities.

The eighth edition of annual ConsumerLab TV and Media report predicts that on-demand viewing will continue to grow rapidly through to 2020, when it will make up almost half of total viewing.

Half of all TV and video viewing will take place on a mobile screen – defined by Ericsson as encompassing tablets, smartphones and laptops – by that date, an increase of 85% since 2010, with the smartphone alone accounting for almost one quarter – an increase of nearly 160% since 2010.

Smartphone viewing is gaining ground; approximately 70% of consumers now watch videos on a smartphone – double the amount from 2012 – making up a fifth of total TV and video viewing.

Sixteen-19-year-olds watch the most content each week (33 hours), an increase of almost 10 hours a week since 2010. However, more than half of this demographic spend their time watching content on-demand, with more than 60% of their TV and video viewing hours spent on a mobile device screen.

Anders Erlandsson, senior Advisor, Ericsson ConsumerLab, told DTVE that, overall, the youngest age groups studied are already spending way over 50% of their viewing time on mobile devices, and that 35% of viewing is done just on the smartphone.

While mobile video viewing had been previously focused on low-value user-generated content, Erlandsson said there was evidence of growing viewing of longer form content. “We are seeing more and more used for longer form content,” he said. The most convenient screen in used whatever the viewer’s location, he said.

Smartphone viewing still has a large user-generated element. However, Erlandsson said that the total number of hours spend viewing content is increasing. It is predicted to reaching 31 hours a week by 2020, with user-generated content greatly contributing to that. But services like YouTube also offer increasing amounts of linear content and much of this is being viewed.

“We are seeing a slight decrease in the number of hours spent viewing linear broadcast, but if you add it together the amount of linear viewing is actually up. Live content is growing in importance and the share of viewing of live on broadcast is now 34%,” he said.

In terms of types or genres of content being tracked, Ericsson is not seeing any huge shift. Movies and TV series if anything are being viewed more than previously overall, said Erlandsson.

Erlandsson said that “theoretically [the shift to on-demand] could have an impact on the way content is financed, for example by undermining the ad model”. However, exposure to on-demand ad-free services means that consumers are increasingly irritated by ads even on traditional linear services, he added. “The ad model needs to evolve,” he said, suggesting that more personalization and delivery of relevant ads could help.

For pay TV operators, meanwhile, those that only offer traditional linear channels achieve a lower Net Promoter Score than those that also offer VOD. “Offering the full Monty and enabling consumers to have a seamless experience is becoming increasingly important,” said Erdlandsson.

He said that the pattern of ‘cord cutting’ varies from market to market, determined to a large extent by the price of services and contract terms. In the US, cord-cutting is a definite phenomenon. However, other markets with cheaper services and better-organised content offerings had seen less cord-cutting, he said.

Erlandsson said that there were still significant differences in usage of services between age groups and to some extent between different territories, depending on the structure of the markets and level of development.

“There are differences in markets and age groups. We are seeing significantly higher usage [of on-demand and multiple screens] in the younger population,” he said.

Erlandsson said there were still some differences between different countries. Looking at similar demographic groups across different territories, the differences broadly map differences in “how you sell mobile broadband, connectivity and price plans”, he said. Some markets like Italy have lower consumption of mobile video either because it is expensive or because coverage is limited, he said.

Erlandsson also mentioned the caveat that in emerging economies including China, Ericsson’s findings were based on a study of the better-off 40% of the population with access to services, rather than the overall population, as in Europe and North America.

Another main finding of the report is that virtual reality is on the way up. According to Ericsson, VR is on the road to becoming mainstream in three years, with a third of consumers becoming VR users by 2020.

Erlandsson said that Ericsson had come to this conclusion by asking consumers already using VR what they would do in the future, and asking others when they think they will start using VR.

He said the conclusion that VR will be mainstream comes with caveats – in particular, the price of headsets needs to come down to stimulate take-up. Close to 55% of consumers planning to get VR devices would prefer it if the headsets were cheaper, and almost half think there should be more immersive content available. A third would be more interested in VR if they could get a VR bundle from their TV and video provider.

There are also concerns about being able to move around more freely without being tethered to a computer and being comfortable in general, he said. “But these things are happening and we don’t think this is too big a leap,” said Erlandsson.

He said there are significant regional differences in the speed with which VR will gain acceptance. In Sweden, “it is not going to reach one third. In the UK it will be more like a quarter and more like a fifth in Sweden,” he said. In China, however, take-up is likely to hit 40% of those surveyed.

Close of 60% of viewers now prefer on-demand viewing over scheduled linear TV viewing, an increase of around 50% since 2010. The average number of used on-demand services has increased from 1.6 in 2012 to 3.8 services in 2017 per person. Two in five consumers already pay for on-demand TV and video services today and nearly a third (32%) say they will increase their on-demand spending in the next six-12 months. Portability is also becoming increasingly important factor, with more than a third of consumers wanting access to content when abroad.

Other findings of the report include that while consumers have more access to TV and video services than ever before, the average time spent on searching for content has increased to almost one hour per day, an increase of 13 percent since last year. One in eight consumers believe that they will get lost in the amount of available content in the future. Some 60% of consumers rank content discovery as “very important” when subscribing to a new service, while 70% want ‘universal search for all TV and video’.

Consumers also value high quality viewing experiences as well as immersive experiences. Close to a quarter of the surveyed consumers say they already have access to a 4K UHD TV screen and another third plan to get one.

Ericsson collected data from 13 countries. Approximately 20,000 online interviews were held with people aged 16–69 in Brazil, Canada, China, Germany, India, Italy, Russia, South Korea, Spain, Sweden, Taiwan, the UK and the US. All respondents have a broadband internet connection at home and watch TV or video at least once a week, and almost all use the internet on a daily basis.