Netflix in front globally, but Amazon catching up in APAC

Netflix is still outpacing Amazon Prime Video globally in numbers of active users, but Amazon has emerged as a serious challenger to its rival in the Asia Pacific region since the global launch of its service earlier, according to figures compiled by GlobalWebIndex.

According to the research outfit, 20% of internet users now use Amazon Prime Video each month, compared with 37% who say the same about Netflix.

However, in the Asia Pacific region, the pair are neck and neck, with Amazon Prime Video used by 27% of internet users each month compared with 28% who use Netflix.

In other regions, Netflix holds a firmer lead, but to a varying degree. Netflix has the biggest lead in Latin America, where it is used by 68% of internet users to Amazon’s 8%, and North America, where it is used by 61% to Amazon’s 26. In Europe, where Amazon Prime Video has been available in key markets for longer than in other regions, Netflix leads by 25% to 11%, while in the Middle East and Africa, Netflix is used by 22% of internet users and Amazon Prime Video is used by 12%. 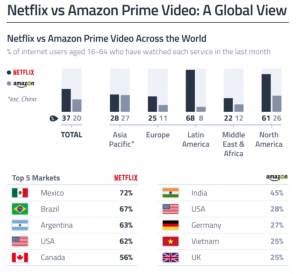 According to GlobalWebIndex, Netflix’s top five countries by market share are Mexico, where it commands the attention of 72% of internet users, Brazil, Argentina, the US and Canada.

Amazon’s top five are India, where it used by 45% of internet users, the US, where it is used by 28%, Germany, Vietnam and the UK.

Amazon announced the global launch of its Prime Video service at the end of last year, and in June extended an introductory price offer that makes the service available for US$2.99 in areas where the Amazon Prime delivery service is not available.

GlobalWebIndex’s figures were based on asking which of the services 34,078 internet users aged 16-64 outside China were using to watch or download TV shows.