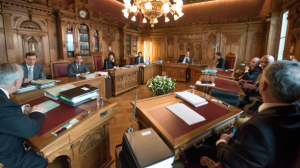 The Swiss Federal Council has approved proposed changes in the country’s Telecommunications Act (TCA) that will give Swisscom’s competitors access to its fibre network and mandate the opening up of shared access points in buildings to enable rival providers to compete.

The Council that access to subscribers should be technology-neutral, and dominant providers will have to guarantee access not only to traditional copper wires but to other technologies including fibre.

The proposed revision of the TCA will now go to the country’s parliament.

UPC Switzerland, along with Suissedigital, Sunrise, Salt, Green, Init7, Swiss Fibre Net and Openaxs issued a joint statement welcoming the change and calling for a quick revision of the TCA to prevent a monopoly in fibre access. It called on the Federal Council to acquire the necessary regulatory authority to guarantee a minimum level of fair competition and ensure investment in network expansion, especially in rural areas.

The operators said that the current TCA, which only regulates access to copper networks, had allowed Swisscom an unfair advantage in fibre.

Suissedigital, UPC, Sunrise and Salt led the call for urgent revision fo the act, with support from Green, Init7 and VTX. The group also claimed support from Swiss Fibre Net AG, the cooperative of local and regional utility companies, which represents large cities and smaller municipalities with open fibre-optic networks, and Openaxs, the association of Swiss electricity supply companies for the promotion of open broadband networks.

“Legislation to date has favoured Swisscom’s home protection, resulting in a distortion of the market at the expense of all other market players. We welcome the proposed revision as a first and important step from the Federal Council towards rectifying this imbalance,” said Eric Tveter, CEO of UPC.

“Today customers in cities and metropolitan areas can choose from several broadband offers and attractive prices. From now on, this needs to be guaranteed in rural areas as well. To ensure continued investment from all providers, the Federal Council must be able to take corrective action if competition is prevented,” said Olaf Swantee, CEO of Sunrise.

“Neither the economy nor the Swiss people should be subjected to yet another monopoly situation. And this includes rural areas. After the copper network monopoly, we must not have yet another high-broadband network monopoly. That is why the Telecommunications Act must be revised quickly, as proposed by the Federal Council,” said Andreas Schönenberger, Salt CEO.