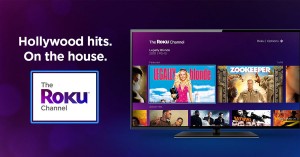 Roku has launched a free movie-streaming channel on its platform, called The Roku Channel.

Available on Roku streaming players and TV sets in the US, the advertising-supported channel will feature films like Ali, The Karate Kid and Legally Blonde from studios including Lionsgate, Metro-Goldwyn-Mayer, Sony Pictures Entertainment and Warner Brothers.

The Roku Channel will also features a selection of free entertainment from existing Roku channel publishers, such as American Classics, FilmRise, Popcornflix, Vidmark and YuYu – with more to be added over time.

Roku claims the channel will feature roughly half the amount of ads per programming hour compared to traditional ad-supported linear TV, and will be accessible without any subscriptions, fees or log-ins.

“We’re always looking for ways to add value and make TV better for our customers,” said Rob Holmes, vice president of programming at Roku. “With The Roku Channel, we’re responding to consumer demand and helping content publishers deliver content through a new experience that makes finding free entertainment easy for our customers.”

The Roku Channel will be made available on current generation Roku devices in the US through a phased roll out over the coming weeks.