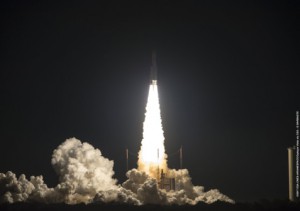 Eutelsat nevertheless said its video business had performed well, boosted by Significant contract renewals in Europe and in MENA with Arqiva at 28° East, and Digiturk at 7° East as well as a multi-year, multi-transponder contract with NTV-Plus on Express-AT2 to reach homes in Far Eastern Russia and incremental capacity on Express-AT1 to consolidate coverage of Siberia.

“During the past year, we have delivered or over-delivered on all our financial commitments,” said CEO Rodolphe Belmer. He said the company was “laying the foundations for long term value-creation, with a strong focus on securing durable capex efficiencies while paving the way for step up in growth in the early 2020s, supported by our Connectivity verticals.”