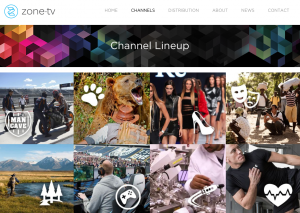 US best-of-the-web channel provider ZoneTV has hired Ooyala to provide technology to enable it to automate the curation of its content into customisable channels ahead of the launch of the service in the autumn.

The content in the channels will be presented to viewers using the ZoneTV Programming Studio, which is integrated with Ooyala’s Flex CMS and with Video Indexer, part of Microsoft Cognitive Services, to curate specialised channels, according to Ooyala.

ZoneTV will also utilize Ooyala’s Flex Platform, the company’s platform for video production and distribution workflows, for its video workflow for both new specialized channels and its VOD assets. Flex runs on Microsoft Azure Media Services and can transform assets into various formats for distribution to multiple devices with Ooyala’s video platform;

“We’re building the next generation of pay-TV services, so we need next-generation tools. With the combination of Ooyala’s platform and Microsoft Cognitive Services, the ZoneTV Programming Studio delivers an unmatched capability to enhance the TV ecosystem and translates into a one-of-a-kind viewer experience,” said Jeff Weber, CEO, ZoneTV.

ZoneTV has deals with AT&T, Comcast and DirecTV among others. Weber was previously in charge AT&T’s U-Verse IPTV service.