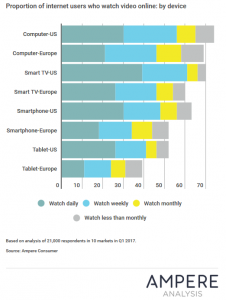 Compared to Europe, the US has a higher proportion of internet users who watch video online, according to Ampere Analysis.

The research firm said that US web users out-watch their European counterparts on all major connected devices.

In the first quarter of this year some 30% of US internet users said they watched video on their smartphone daily, compared to 18% in Europe.

“Online video in the main way of viewing for an increasing number of US consumers,” according to the report.

“The proportion of internet users who strongly agree online video services are the main way they watch TV and film has passed one in five in the US.”