Facebook: 94% of TV viewers watch with phone in hand 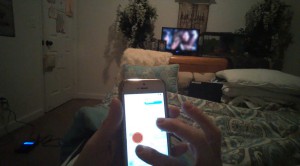 A participant in Facebook IQ’s eye-tracking study. The red dot indicates where their eyes were focused.

Some 94% of US TV viewers keep their smartphone in hand while watching TV, according to research by Facebook IQ.

Facebook’s research and insights arm said that viewers focused on the TV screen just 53% of the time and that one of the top reasons they looked away was to use their smartphones.

Facebook IQ conducted an eye-tracking study on 100 participants and found that household chores, such as folding laundry or cooking dinner, were what drew viewers’ attention away most often, followed by smartphones and other devices, such as laptops.

Facebook IQ said that the subset of 58 participants who watched TV shows with ad breaks “disengaged during a third of the commercial breaks, usually about 2.5 seconds into the first ad”.

The social network said that this lined up with Facebook data that suggests multi-screening often occurs during TV ad breaks.

By taking a sample of one million people who indicated on Facebook they were viewing the premiere of a popular cable TV drama, Facebook said that during ad breaks their use of the social network sometimes spiked more than three-fold.

“Any discussion of multiscreening must start with noting a larger trend: people in the US are watching less live TV and spending more time on mobile than in the past. This is especially true for younger generations,” said the Facebook IQ report.