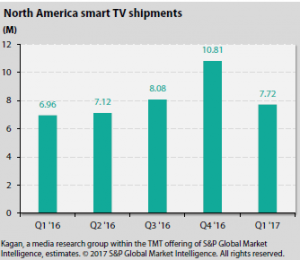 The research claims that the figure compares to 6.96 million North American smart TV shipments in Q1 2016, but has “settled down” compared to the 10.81 million shipped in Q4 2016.

According to the report, some 70% of all TVs shipped in North America in 2016 were smart TVs – with these sets becoming more popular as the trend of streaming content via services like Netflix, Hulu and Amazon Prime “slowly replace traditional cable subscriptions”.

“Smart TV functionality is available for TVs with a wide range of display sizes, but has been more widely adopted among sets with displays of 40-inches or larger, especially on high-end models which go upwards of 60-inches,” said the study.