Ampere: Saudi web users consume the most TV and video 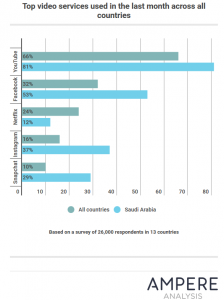 Saudi Arabian internet users watched more TV and video online than people in any other country, according to a new global study by Ampere Analysis.

The research firm found that 87% of viewers in Saudi Arabia watch online video content on their smartphones, versus a survey average of 58% across 13 countries.

The number of Saudis viewing video via tablet devices was also high at 60%, compared to the survey average of 43%.

“Social video is key in Saudi Arabia,” according to the report. “YouTube tops the list of video services viewed in the past month, having been watched by 81% of Saudis versus an all countries’ average of 66%. The number of Saudi Arabians watching videos on Facebook is also high at 53% versus an average of 32%.”

Internet households in Saudi Arabia were also found to be more likely to pay for SVOD services, at 48%, than pay TV, at 38% – bucking a global preference for pay TV.

Despite this, Netflix and Amazon have “yet to make much of an impact” in Saudi Arabia, with social media platforms and local players such as MBC’s Shahid important to consumers, according to the research.

“Saudis came top in our research for using a range of connected devices – from smartphones and tablets to smart TVs and games consoles – and they are certainly using them to enjoy TV and video content,” said Ampere research director, Richard Broughton.

“Almost six in 10 (59%) Saudi Arabian internet users view online video on their smartphone every day, significantly higher than the survey average of 25%. And social video services feature high on the agenda as well, reflecting the strong millennial contingent in the country, and the significance of mobile broadband infrastructure.”

The research was based on a survey of 26,000 respondents in 13 countries around the world. These were the USA, UK, France, Germany, Spain, Italy, Netherlands, Denmark, Sweden, Brazil, Poland, Turkey and Saudi Arabia.