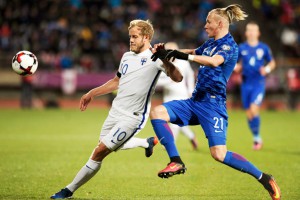 Modern Times Group (MTG) has secured the exclusive Finnish rights to the UEFA European Qualifiers in 2020 and the qualifying tournament for the FIFA World Cup in 2022, along with the rights to UEFA’s new European competition, the UEFA Nations League.

MTG will hold the rights to the UEFA Nations League in Finland for 2018-19 and 2020-21. The league – the new national competition for UEFA member nations – will kick off after next year’s World Cup, replacing the current calendar of friendly matches.

The deal means that every season, a total of 250 national team games will be shown on MTG’s Viasat pay-TV channels and Viaplay streaming service. A large number of selected high profile games will also be available on Viafree, the free streaming service launched in Finland in April 2017.

Mathias Norrback, CEO Viasat Finland said: “It feels great to add some of the most exciting national team football matches to our unrivalled portfolio of international club football rights. Finnish fans will now be able to experience the excitement of two qualifying tournaments and the UEFA Nations League on more platforms than ever before, and we are particularly excited about making many games available to everyone, everywhere through Viafree.”