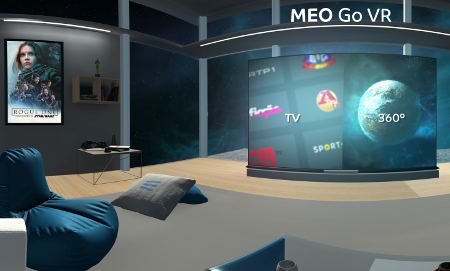 Meo has launched the VR service as part of Meo Go, its multiscreen TV offering.

The new MEo Go VR application enables users to follow series and soap operas as well as live experiences such as jumping from a helicopter or snowboarding, and a visit to the Cristo Redentor statue in Rio de Janeiro.

The content has been developed via partnerships between Meo and Portuguese broadcaster SIC, fashion channel FTV, SyfFy, History and Clubbing TV.

The app also takes users to a virtual, technologicially advanced living room where viewers can watch live TV channels on a giant screen, as well as viewing the available 360° content, according to the telco.

The app was developed by Altice Labs, the Altice Group’s Portugal-based R&D arm, and Gema Digital, a specialist in the creation of VR, augmented reality, holographic and interactive experiences.

The launch has been timed to coincide with the launch in Portugal of the new Galaxy S8 smartphone by Portugal Telecom.

The Meo Go service is availbel to all Meo TV and home internet customers.