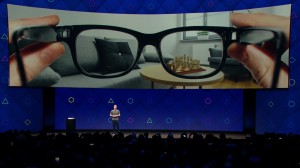 Facebook signalled a major push into augmented reality and launched a VR app for communicating with friends at its F8 conference yesterday.

“If you take one thing away from today, this is it: We are making the camera the first augmented reality platform,” said Zuckerberg in his F8 keynote.

The Facebook boss described the previous rollout of camera functionality across all of Facebook’s apps as “act one”. Act two, he said, is “giving developers the power to build for augmented reality in the first augmented reality platform: the camera”.

Starting with ‘basic effects’, Zuckerberg showed images of Snapchat-style photo overlays like facemasks, but said that as an open platform users will be able to create their own and “instead of having 10 to 20 options to choose from, you’re going to have thousands”.

The Camera Effects Platform includes two products. Frames Studio lets users design frames that can be used either with profile pictures or in the new Facebook camera. AR Studio can be used to create masks, scripted effects, animated frames and other AR technologies that react to movement or interactions during live videos. Frame Studio is available globally, while AR Studio is now open for beta applications.

Discussing the use of AR in a general sense, Zuckerberg described the power of overlaying digital content onto the real world via glasses or contact lenses and said that doing so would “make our physical reality better”.

“You want to watch TV, we can put a digital TV on that wall and instead of being a piece of hardware, it’s a US$1 app instead of a US$500 piece of equipment,” he said.

“Think about how many of the things we have in our lives actually don’t need to be physical, they can be digital, and think about how much better and more affordable and accessible they’re going to be when they are.”

At F8 yesterday, Facebook also launched a new virtual reality app, Facebook Spaces, which is designed to let users hang out in virtual environments “as if you were in the same room”.

The app lets users interact, share 360° videos and photos and “relive personal memories from your own Timelines, or even make new ones,” according to Facebook.

Facebook Spaces is available in beta now for Oculus Rift and Touch and can be downloaded from the Oculus Store.