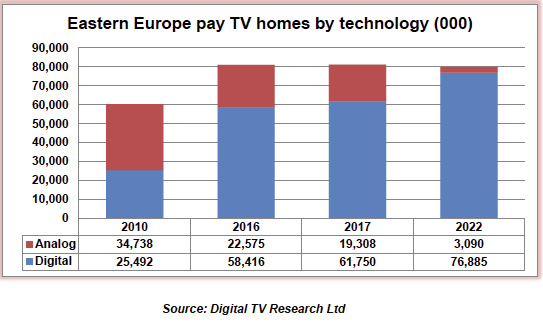 Eastern Europe will lose one million pay TV subscribers between 2016 and 2022, according to Digital TV Research.

The report claims that poor job prospects in the region, forcing people to seek work abroad, combined with low birth rates, will have a knock-on effect for the TV sector.

“The number of TV households will fall in 18 countries between 2016 and 2022 – with the region’s total declining by almost two million. Pay TV will struggle, losing one million subscribers over the same period,” said Digital TV Research principal analyst, Simon Murray.

According to the study, this year will be “the peak year” for pay TV in Eastern Europe, with some of the 23 million subscribers to analogue cable at the end of 2016 likely to convert to free-to-air digital terrestrial television (DTT) rather than to a digital pay platform.

“Pay TV revenues in Eastern Europe will peak at US$6.11 billion in 2017 before settling at the US$6 billion mark. Analogue cable will contribute US$1 billion to the 2017 total, falling to US$184 million in 2022,” according to the research.