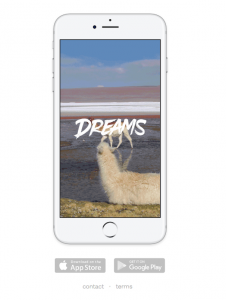 Dreams collects videos from more than 100 content partners into a swipeable interface, which the company likened to channel surfing on a traditional television.

The app only displays portrait or vertical videos, which fill a mobile phone screen when held upright, and the company has converted more than 500 videos into this mobile-first format.

The app is the product of New York-based startup Dreams Media, which was co-founded by Tom Bender, formerly a product manager on the DoubleClick team at Google, and Greg Hochmuth, who was an early engineer and product manager at Instagram.

“We asked what TV would look like if it was invented in 2017. We ignored legacy devices and designed a TV experience that’s native to the phone,” said Bender.

Hochmuth added that so far it has seen “surprisingly high watch times” with users watching “some live speeches and events for well over 10 minutes on average”.

Dreams offers push notifications for important live news broadcasts, is available free for iOS and Android, and requires no log-in or registration.