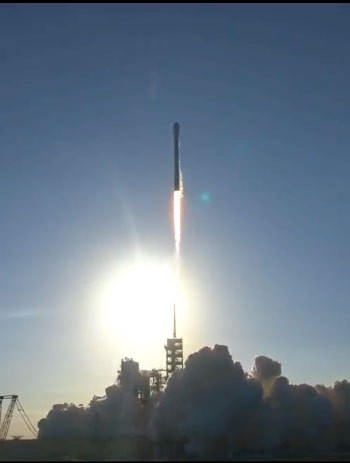 SES-10 is the first geostationary commercial satellite to launch on a re-used first-stage rocket booster.

The satellite has a Ku-band payload of 55 36MHz transponder equivalents. The spacecraft is the first SES satellite wholly dedicated to providing service to Latin America. SES-10’s beams will augment SES’s capabilities across the region providing direct-to-home broadcasting, enterprise and mobility services, according to the operator

SES-10 will replace capacity currently provided by other SES satellites at 67° West, as well as bring additional capacity to Mexico, Central America, South America and the Caribbean.

The satellite will also operate as the Andean Community’s Simón Bolivar 2 craft, providing satellite capacity for each Andean Member State. The Andean satellite project comes from the shared Member States’ interests in having a common satellite network taking advantage of the Andean spectrum resources at 67° West.

“The successful launch of SES-10 on SpaceX’s first ever mission using a flight-proven rocket is opening up a new era of spaceflight. We are proud to have partnered with SpaceX on this journey of innovating and using reusable rockets that will make access to space more efficient in terms of cost and manifest management.The additional capacity offered by SES-10 is ideal for providing additional TV services with better picture quality as well as faster broadband services – both of which will be welcomed by millions of people throughout Latin America and the Caribbean,” said Martin Halliwell, CTO at SES. “

“We are thrilled to have achieved the successful launch of a flight proven Falcon 9. This is an historic milestone on the path to complete and rapid reusability,” said Gwynne Shotwell, president and COO at SpaceX

“We are pleased to have accomplished this milestone with SES, which has been a strong supporter of SpaceX and innovation over the years.”