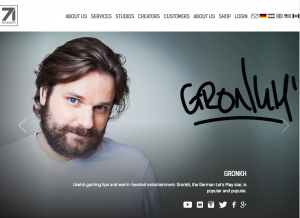 In what’s being described as a strategic digital media alliance, TF1 and Mediaset will take stakes of 6.1% and 5.5% respectively in Germany- and US-based MCN Studio71.

Furthermore, ProSiebenSat1. and Mediaset have created a joint venture to roll out the Studio71 business model – which comprises marketing, monetisation, distribution and production of webvideo content – in the Italian market.

This means Studio71, which claims around 500 million video views a month in German-speaking territories and six billion worldwide, will push into new European markets following debuts in Germany, the US, Canada, the UK  and Austria.

Studio71 was founded in 2013 in Germany, and now has eight offices and nearly 200 employees. As a result of the new deals, new offices will launch in Paris and Milan.

The US arm, previously Collective Digital Studio, has been trading under the Studio71 banner since January 2016.

The wider group was known as Collective Studio71 after a transformational merger between Collective and ProSiebenSat.1’s MCN business in July 2015, however, the Studio71 moniker was made the operatingbusiness name in January 2016.

“The partnership with TF1 Group and Mediaset gives us access to key European markets where the online video market is just now really picking up momentum and promising significant potential,” said Christof Wahl, member of the executive board, digital and COO at ProSiebenSat.1 Group.

“With the united marketing power of our media companies, we have an attractive ecosystem with which we can generate additional income and continue Studio71’s digital success story.”

Olivier Abecassis, VP, innovation and digital at TF1, said the partnership was “absolutely in line with the strategy being driven by TF1’s CEO Gilles Pélisson, and with the Group’s new ambitions in digital”.

“By taking a stake in Studio71, the TF1 Group is positioning itself in the global digital ecosystem alongside two of Europe’s leading media groups, and by becoming the operator of Studio71 France, we are bolstering our presence in multi-platform premium online video, and our status as a key partner for emerging web creatives”.

For Mediaset, the ProSiebenSat.1 model will help drive revenues, according its chief digital officer, Pierpaolo Cervi. “We join a digital global partner like Studio71, with a deep broadcaster DNA, in order to build a leading player in the Italian market for the editorial management and monetisation of digital talents, to maximise the distribution of Mediaset TV contents on internet and to boost synergies between TV and web,” he said.

TF1 and Mediaset are already members of the ‘European Media Alliance’, which is a network of European broadcasters committed to creating common synergies and investment opportunities in the digital space, which ProSiebenSat.1 founded in 2014.