SpaceX explains cause of Amos-6 explosion 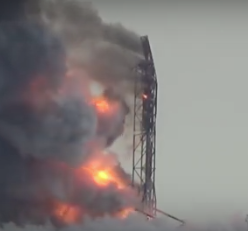 SpaceX has identified the fault that caused Spacecom’s Amos-6 satellite to be destroyed in a launchpad explosion last September.

“Specifically, the investigation team concluded the failure was likely due to the accumulation of oxygen between the COPV liner and overwrap in a void or a buckle in the liner, leading to ignition and the subsequent failure of the COPV,” said SpaceX in a statement.

The company said that in the longterm it will implement design changes to the COPVs to “prevent buckles altogether, which will allow for faster loading operations”.​

SpaceX’s first launch since the accident is scheduled on January 8. This will be for an Iridium Communications satellite that is due to blast off from the Vandenberg Air Force Base in California.

Amos-6 was destroyed after the SpaceX Falcon 9 rocket that was due to carry it into space exploded during a standard pre-launch static fire test at Cape Canaveral on September 1.

Over the past four months, officials at the Federal Aviation Administration (FAA), the US Air Force (USAF), the National Aeronautics and Space Administration (NASA), the National Transportation Safety Board (NTSB), and several industry experts, worked with SpaceX to investigate and determine the cause of the explosion.

In November Spacecom said it was set to receive a US$196 million (€177 million) insurance payout for Amos-6, and in December it secured an in-orbit replacement for the satellite.