PwC: the future of video is mobile first 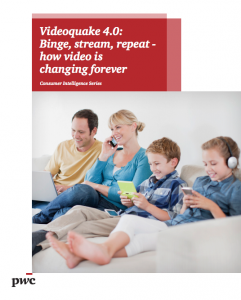 The future of video is mobile-first, with 70% of 18-24 year-olds now claiming that their phone is the primary place that they view video content, according to new US research.

PwC’s ‘Videoquake 4.0: Binge, stream, repeat – how video is changing forever’ report claims that the mobile viewer is “changing content creation and curation” with 91% of survey respondents owning a smartphone and 76% viewing video on their mobile devices.

Overall, across all age groups, 60% of respondents said that their smartphone was the primary place where they view video content, 76% said they are watching more video on their phones than they were a year ago and 90% said they believe that using a mobile for video is on the rise.

PwC found that while, in general, people tend to watch short-form content from YouTube and social networks on their mobiles, 62% of 18 to 24-year-olds reported watching TV shows on their mobile devices.

“Screens are ubiquitous. So are content offerings. Therefore, the mobility of content across screens has never been more important,” said Deborah Bothun, PwC’s global lead on entertainment and media.

“In order to gain and retain consumer share of voice, content should be customised to this multiscreen lifestyle and flow from platform to platform, best optimised for each unique user experience.”

Despite the growing importance of mobile, PwC said it did not see the surges in cord cutting that many expected – even though there was a continued dip in traditional pay TV subscribers this year.

“When we ask pay TV subscribers as a whole if they expect to subscribe to cable one year from now, we don’t see huge declines over time. In fact, we see a slight uptick in 2016, indicating that cord cutting may continue at a much slower rate than predicted,” said the report.

The research sampled more than 1,200 US consumers via a national online survey of adults aged 18-59 with households incomes above US$40,000. PwC also conducted two consumer focus groups in Los Angeles – one group focused on millennials and Gen Z, the other on traditional pay TV subscribers and ‘cord trimmers’.