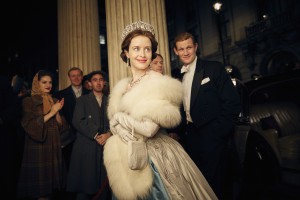 Netflix is set to ramp up its British production efforts, with co-production deals in place with the three main UK terrestrial broadcasters.

Speaking at the RTS London Conference yesterday, Netflix’s chief content officer, Ted Sarandos said that Netflix had already had global success with the UK shows it has licensed for its service and claimed that more British commissions are on the way.

“We are in co-production agreements right now with ITV, with Channel 4 and with the BBC on several projects. We’ll announce at least four more before the end of the year of these co-productions where the British broadcaster will take the first window and we’ll follow but we will launch it on Netflix around the world,” said Sarrandos.

“What we find is that we have had such success with British programming in the US and around the world, with Happy Valley, Peaky Blinders, River, that it’s a natural extension of that for us to commission original British programming.”

Sarandos discussed four confirmed British Netflix shows, including three that are due to launch imminently. Its most high-profile is the big budget, Left Bank Pictures-produced royal drama, The Crown, which is due to go live globally on November 4.

A new six-episode run of Black Mirror, the dark Channel 4 drama that Netflix picked up for a third season last year, will launch in October. Meanwhile, Lovesick, a revived and renamed second season of the cancelled Channel 4 sitcom, Scrotal Recall, is due to appear later in November.

Our Planet, Netflix’s landmark 4K natural history series from the creators of the BBC hit Planet Earth, is not due to launch on the SVOD service until 2018.

Beyond this, in January Channel 4 said that Kiss Me First, a six-part emotional thriller, is coming to E4 and Netflix. The BBC said in April that it will work with Netflix on a four-part animated remake of kids film Watership Down. Meanwhile Studiocanal’s Red Production Company and ITV said in August that Netflix had come on-board as a co-production partner for eight-part thriller Paranoid.