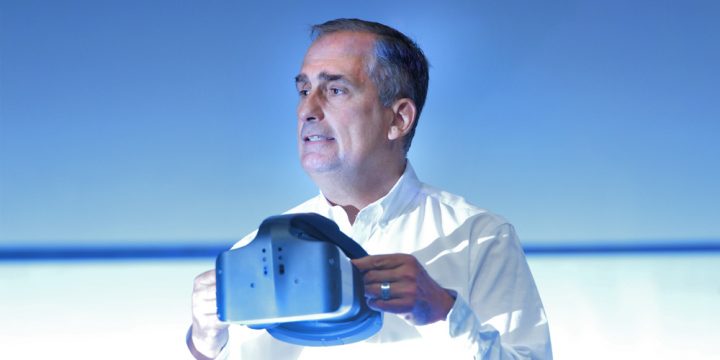 Intel CEO Brian Krzanich has used his company’s Developer Forum in San Francisco to unveil a new integrated virtual reality system – Project Alloy – that allows users to untether themselves from computers and other external devices and interact with the real world. Intel has also teamed up with Microsoft to optimise Windows-based content on Intel-based VR devices.

Project Alloy will be offered by Intel as an open platform next year, enabling developers to create their own products from the Alloy design.

The design demonstrated by Krzanich in San Francisco has computing power located in the head-mounted device, giving users free range of motion across open spaces. The device integrates collision detection and avoidance technology. Intel RealSense cameras attached to the headset take the place of any external sensors or cameras placed around a room.

The device allows users to use their hands to interact with elements in the virtual world, creating “merged reality”, in Intel’s parlance.

Intel’s collaboration with Microsoft will see the pair work to build a range of devices for the consumer and business markets based on a specification for ‘mixed reality’-ready PCs and head-mounted displays. The pair plan to publicly release version one of the spec at the Windows Hardware Engineering Community conference in Shenzhen, China, in December.

Microsoft also plans to release an update of its Windows 10 operating system next year that will enable PCs to run the Windows Holographic shell – a framework that allows for the blending of 2D and 3D apps simultaneously along with mixed reality applications.

“Project Alloy takes the cord off the virtual reality headset,” said Krznanic during his keynote. “It is completely contained… It is a completely self contained virtual world all in one package.”

He said that the device provided the ability to “merge the physical and virtual world together”.