Eastern Europe ‘wakes up’ to OTT 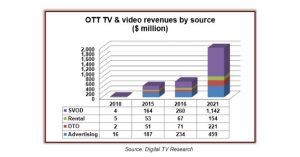 A leading media analyst has said that eastern Europe has ‘woken up’ to OTT and revenues from such services will rocket.

Digital TV Research forecasts OTT revenues will rise from the US$454 million recorded last year to almost US$2 billion by 2021.

Russia currently accounts for half of the eastern Europe OTT revenue and subs total and will continue to take that share as the sector grows, the new research says. Poland is another regional OTT leaders.

Simon Murray, principal analyst at Digital TV Research, said: “The Eastern European OTT TV and video sector is more immature than most of the rest of the world. Although this is changing with several platform launches, the region will still have lots of room for growth after 2021.”

The growth is being driven by Netflix, which launched in the region as part of its global rollout. The prospects for the US service are however being talked down in the region. Executives here in Budapest for NATPE this week are largely dismissive of the impact it will have, adding to earlier similar sentiment from regional media chiefs.

“Netflix launched across the region in January 2016,” Murray said. “However, it has been criticised for being too expensive [€8-12/month], lacking local content – or even being too English-language, and is yet to announce any local distribution partnerships.

“Perhaps Netflix has plans to rectify this, but it better move quickly before local players (especially in Russia and Poland) gain too great a foothold.”