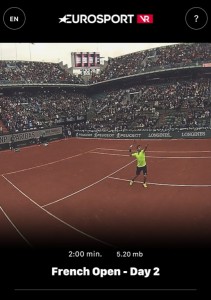 Eurosport VR will give viewers access to immersive sports content, including highlights from Roland Garros and exclusive behind-the-scenes footage shot in VR.

During Roland Garros fans will be able to “see the world through the eyes of some of the tennis’ biggest stars”, with 360-degree on-court views during player interviews, according to the broadcaster.

Throughout the rest of the year Eurosport said it plans to use the app to help its viewers “get closer to the action than ever before,” with the app building on Eurosport and parent firm Discovery Communications’ development of a range of VR content – including footage from last winter’s Alpine Skiing World Cup.

“We continually strive to deliver new and exciting ways for fans to immerse themselves in world-class sport. Using innovative production technologies, the Eurosport VR app will transport fans right to the heart of the action and bring them closer than ever to their heroes,” said Eurosport CEO Peter Hutton.

Eurosport VR is available to download now on iOS, Android and Oculus devices. Users can experience the content using VR goggles such as Samsung Gear VR, or alternatives like Google Cardboard.