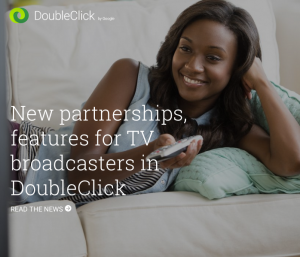 Google is launching dynamic ad insertion for video and is adding TV listings to its search in a bid to effectively target video providers by adding more TV-like functionality to its platform.

The company is launching DoubleClick dynamic ad insertion to enable publishers to make money from video online and deliver a personalised viewing experience. Google has tested the technology with the Rugby World Cup finals with French commercial broadcaster TF1 and during the Republican presidential debates in the US on Fox News.

The technology works across live and on demand TV, said Alegre. TV broadcasters will be able to dynamically insert ads into streamed content, replacing the ads in the original broadcast stream based on a number of factors.

Alegre said Google had invested heavily in bringing programmatic advertising to TV. The company will enable “smart ad breaks” across both direct and indirect advertising inventory to enable programmatic buying and selling, by ensuring for example that the same ad doesn’t appear in the same ad break and meet compliance concerns, he said.

Streaming device manufacturer Roku and US cable operator Cablevision will use the technology to bring programmatic advertising across multiple screens, said Alegre.

Separately, in the US Google search will soon have live TV listings added, enabling viewers to search for content they want. Alegre said that Google is pushing for TV companies to provide information, including real-time sports updates, to it in order to bring improved search for video content to the platform.

Google previously introduced search that showed users where video could be found online. The listings feature will enable users to add their own TV provider to see what is available on their service.

“Over 400 new scripted TV shows appear every year. Fifty per cent of linear consumers in the US say they can’t find anything to watch on a daily basis,” said Alegre, adding that Google was working on ways to help viewers find content by addressing what is now the first screen – the mobile phone.

The company recently launched a new mobile search feature for content related to the Oscars. Similarly, it has enabled discovery and second screen voting features for other big events, he said.