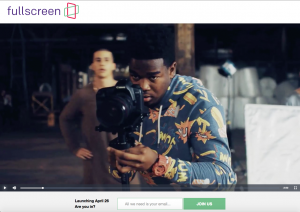 Multichannel network (MCN) Fullscreen is due to launch a subscription video-on-demand service featuring scripted and unscripted originals, acquisitions and movies.

The US$4.99 per-month, ad-free service – also called Fullscreen – is due to debut internationally on April 26 and will feature new content daily, as well as playlists and original content from Fullscreen content creators.

The subscription offering will target a 13-30 year-old audience and will feature 800 hours of content, initially via iPhone, iPad, select Android Phones and Chromecast, with more device support to follow later in the year.

“This is for an audience that we know and love — a generation of young people that grew up with online video and social media. The phone is their primary screen and they look up to an entirely new breed of creators and stars,” said Fullscreen founder and CEO, George Strompolos.

Fullscreen is majority owned by Otter Media – a partnership between AT&T and The Chernin Group – and AT&T has signed up as the launch partner, promoting the SVOD service to its more than 100 million video, mobile and broadband customers.

Unscripted series include My Selfie Life, and Shane & Friends, while the SVOD service will also include library titles such as teen drama series Dawson’s Creek (Sony Pictures Television) and highschool comedy series Saved by the Bell (NBC Universal).

“We believe that SVOD services and OTT offerings are the future of video entertainment, and we are incredibly excited about the Fullscreen SVOD launch,” said Chernin Group CEO, Peter Chernin.

“Fullscreen SVOD will be uniquely positioned in the marketplace, with a signature personality and strong product features designed specifically for a millennial audience. We are delighted to expand our working relationship with AT&T who has been a great forward-thinking partner, and we can’t wait to deliver this service to as many connected consumers as possible.”