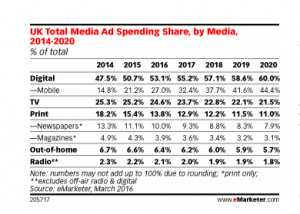 Mobile ad spend in the UK is expected to rise by 35% this year, overtaking TV advertising spend for the first time, according to eMarketer.

The research firm predicted that mobile ad spend will grow to £4.58 billion in 2016, accounting for 27.0% of UK total media ad spend.

The growth in mobile ad spend will also see it surpass desktop ad spend for the first time in 2016, with the latter expected to reach £4.44 billion, according to the research.

“Ad spend tends to follow eyeballs, to a degree, and with mobile time accounting for an ever greater proportion of the average UK consumer’s media day, it’s little wonder that mobile ad spend has hit this milestone and is driving the digital total,” said eMarketer analyst Bill Fisher.

Overall digital ad spend – including mobile and desktop – will continue to take the largest slice of the overall paid media market this year, according to the research. It is forecast to hold a 53.1% share in 2016, rising to 60.0% by 2020.