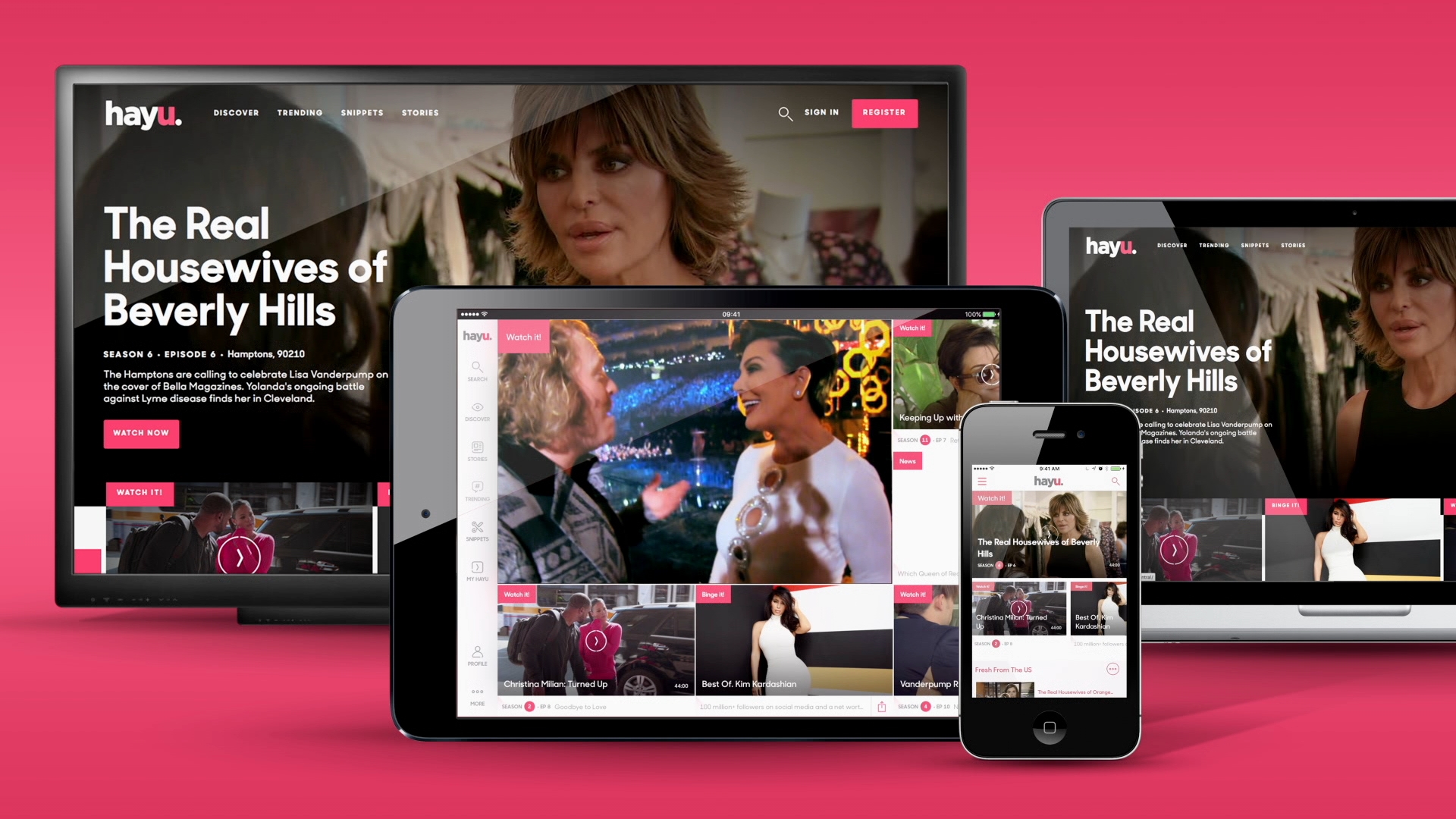 NBCUniversal International is launching a reality-themed direct-to-consumer OTT service called hayu, featuring over 3,000 episodes of its stable of reality shows including Keeping Up with The Kardashians, Made in Chelsea, The Real Housewives and The Millionaire Matchmaker.

The service will be launched in the UK, Ireland and Australia in March, with a monthly fee of £3.99 in the UK, €4.99 in Ireland and A$5.99 in Australia. There will be no ongoing contract and would-be subscribers will be offered a one-month free trial.

NBCUniversal describes hayu as “the first all-reality service of its kind”, incorporating curated content and integration with social media, with a range of innovative features, including specially made short-form snippets of content that can be shared directly via fans’ social media accounts. The service will link directly to a wide range of third-party news sites with relevant content such as OK! and MailOnline.

Users will also be able to directly access the social media feeds of stars of the shows they follow.

Most content will debut on the service on the same day as it premiers in the US, with over 500 episodes added each year. Box sets of shows will be available.

hayu will be headed up by Hendrik McDermott, currently NBCUniversal’s senior vice-president branded on-demand, and the company has hired Phebe Hunnicutt, digital director of Elle at Hearst Magazines UK, to take charge of editorial and look after hayu’s overall look and feel.

MacLellan said that the service in its current form will be a pure direct-to-consumer offering. “We have been totally upfront with our distribution partners from the start, talking about how we can use this service to promote the reality content they have on air,” he said.

MacLellan said that only “a small proportion” of the reality content that NBCUniversal produces each year is currently distributed in the three territories in which it is launching hayu.

“There are multiple networks that we run seven days a week in the US. There is a lot of that content that people are pirating online, so we know they want to see it but don’t know where to get it. My hope is that this service will take that reality content and get people more interested by allowing them to watch more episodes and watch seasons from the beginning…and that will help drive people to the linear services as well,” said MacLellan.

According to MacLellan, there are “about 50 shows” on the service that have never been seen in the UK. He also pointed out that a number of shows only became popular several seasons in, with people not having been able to see the first seasons of shows including Keeping Up With the Kardashians until now.

He said NBCUniversal had been able to find windows for the vast majority of the content aired on linear channels. He said some content aired by third parties had been re-licensed, including UK shows such as Made in Chelsea, aired by Channel 4, where hayu will make available catalogue episodes.

MacLellan admitted that some existing distribution partners were “nervous” about the initiative but said that there was “less nervousness because we went to them from the beginning than if we had just launched it without talking to them…our key partners in these markets have know about this for months.”

MacLellan said that he had not set any subscriber targets for hayu. “Predicting user behaviour with something that does not yet exist is really hard. What interests me most is how consumers react. The first portion is what is the engagement level and what drives them to different products.”

He said that NBCUniversal would be able to implement changes very quickly to the service based on how it is used. “I’m really not as focused – certainly at the beginning – on how many subscribers there are but on how people are engaging with it. My feeling is we can change it in real time and make it more appealing. In a year’s time I will start to look at what the numbers should be.”

MacLellan said that the price point was “more or less” based on prices for other services that are already available and on things that the target audience pays for on a regular day-to-day basis. “We can say that this has real value and costs less than a Frappuccino,” he said.

MacLellan said that NBCUniversal had decided to focus on English-language markets to start with, avoiding the need for dubbing. The three launch markets are also the source of much pirating of the content currently, he said.

MacLellan described hayu is a “next generation VoD service with an appropriate level of interaction” for the target audience of 18-39 year-old females. “We know this is a very socially engaged group with a real affinity for this type of content and they enjoy talking about this type of content with their friends, not only personally but online,” he said.

“It seemed like a great opportunity to aggregate the content into one place but we wanted to do more than just be a video service provider. We knew that this audience was different than that for what I would describe as general entertainment video services and that it would take something more than just video to engage them on a longer-term basis. One of the big premises for this was that it should be a service and that term is very important in the design. We wanted it to be simple and easy for them to get the content when and where they wanted and also to make it appealing by not including advertising.”

MacLellan said that there is often “a huge amount of churn on these services” and so it was important to ensure that users see the value of what was being offered.

In order to enable navigation through the content the apps are tailored for the devices being targeted with horizontal scrolling across the guide on tablets and vertical scrolling on phones.

The home page is editorially curated by people who change the content to match what is happening in the news on an ongoing basis.

“This is the type of content that people will watch on the go – it’s very snackable content,” said MacLellan. Users can watch parts of shows and pick up where they left off later.

News from third party sources can easily be shared with social media contacts and users can dip and out of the service into the website of the relevant news partner.

MacLellan said that NBCUniversal had decided to allow people to “come in and out of the service as they please”.

“Many companies are trying to keep people in, but if people are paying a subscription for this it should be a high-quality service,” he said MacLellan. By paying a subscription, users obtain a “pathfinder” in the form of hayu that can help aggregate all sources of reality star news and information, he said. “We are providing an easy way for people to identify and interact with the type of content that they want,” he said.

The service also curates a collection of Tweets and Instagram posts from reality stars. A high proportion of the content, including news ‘snippets’, is available outside the paywall and can be viewed and shared by non-subscribers.

hayu also includes a comprehensive search function that identifies all material related to particular stars. Fans can use this to find all the material they have previously viewed. Users are also able to rate contents using Emojis, enabling them to use these to rate content according to its emotional impact. They can also search using the same Emoji ratings, enabling them to find content that matches their emotional state.