ACMA: 14% of Australians use Netflix 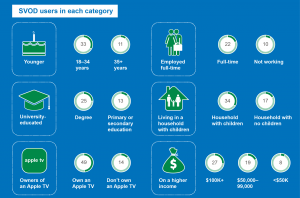 An estimated 14% of adult Australians, some 2.5 million people, used Netflix to stream TV shows or movies in the six months to June 2015, according to media regulator the ACMA.

Research by the Australian Communications and Media Authority said that after launching in March, Netflix now accounts for “the majority of SVoD services used in Australia” – edging out competition from other new entrants like Presto TV and Stan.

“Amongst SVoD users, 78% used Netflix Australia in the six months to June 2015, and 88% in the past seven days at June 2015,” said the ACMA, after surveying 1,505 Australian adults in May and June about their use of SVoD services.

The study said that people were more likely to be SVoD users if they fit the following demographics: are aged between 18 and 34; work full-time; have a degree; live in a household with children; have an income of A$100,000 per year; or own an Apple TV.

“Streaming services allow a user to watch video content on their own terms—at any time that suits. Almost half of SVOD users (49%) reported this as one of the main benefits of accessing video content online, as compared to watching content on pay TV or free-to-air television,” said the ACMA.