Amazon Instant Video launches on Roku in the UK 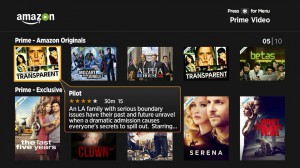 Amazon Instant Video has launched on the Roku streaming platform in the UK and Ireland today.

With the rollout, Roku claims that it now offers access to “all major streaming services” in the UK – including Netflix, Google Play Movies, Now TV, Sky Store and catch-up services from broadcasters the BBC, ITV, Channel 4 and Channel 5.

Viewers can use the Amazon app to rent or buy more than 50,000 movies and TV episodes, while Amazon Prime subscribers can access some 15,000 titles through its SVoD offering, Amazon Prime Instant Video.

“Amazon Video is one of the most popular streaming services among British consumers and we are delighted to make it available to our UK customers,” said Ed Lee, vice president of content acquisition at Roku.

“With the addition of Amazon Video in the UK we now have the most comprehensive streaming channel line-up among major video streaming services and catch-up TV channels.”

Roku Search launched in the UK earlier this year and lets viewers look for movies, TV shows, actors and directors across selected channels. Amazon Video is already accessible via Roku Search in the US, while the Amazon app first went live on Roku devices in 2011.

Jay Marine, vice-president of Amazon Video EU said: “Our aim is to make Amazon Video available on all popular connected devices so our customers can access the blockbuster TV shows and movies only available as part of Prime – the UK’s largest streaming service.”