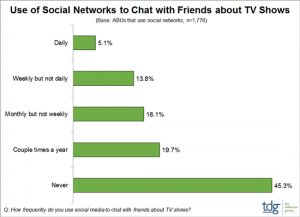 Facebook will overtake Twitter as the “chosen medium for social TV activity” in the next few years, according to The Diffusion Group (TDG).

The research firm said that as consumers start to spend less time viewing live TV broadcasts and turn to time-shifted viewing instead, those engaged in social TV conversations are “less likely to require real-time interaction.”

“This makes real-time platforms like Twitter less relevant. Such platforms will still be relevant for live viewing, meaning Twitter will decline slowly rather than implode,” said TDG.

The company’s ‘Future of Social TV: Strategic Insights’ report predicts that the time users spend on Twitter will decline by 31% between 2015 and 2025 and that the microblogging network will take on a less important role than its current position as “the platform by which many network digital departments measure success.”

TDG said that currently some 55% of adult social network users chat with their friends about TV shows at least a couple of times per year, while 35% do so monthly, and 19% do so daily.

Social TV activities —the use of social media platforms to discuss, comment on, or enhance the television experience — have been primarily fan-driven to date, but will “increasingly take a backseat to interactions around paid placements made by the TV networks,” according to TDG.

“It [Facebook] already enjoys a much larger user base than other platforms and it is the only platform with census-level user numbers. This will spur TV networks to put a majority of their social media dollars into Facebook, which has five times the user base and a much wider demographic reach than Twitter,” said TDG senior analyst, Alan Wolk.