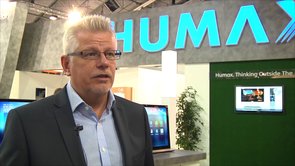 The launch of Freeview Play, the new on-demand service from UK free-to-air platform Freeview, will stimulate and revive the retail set-top box market, according to set-top provider Humax.

Speaking at the launch of Humax’s Freeview Play set-top, the first in the market, Humax commercial director Graham North said that “Freeview Play will help stimulate the retail market”.

“We are still enjoying good retail sales but not during digital switchover,” said North. “The market is down overall but we are stabilising our sales and we have an opportunity to grow again with Freeview Play. This will stimulate the retail market. We see it as an opportunity to drive the retail sector back up.”

Humax marketing manager Mike Gabriel, speaking at the same event, said that while growth had slipped year-on-year in retail, prices were holding up at around an average of £80 a unit, thanks to the growing popularity of HD DVRs. He said Humax had anticipated Freeview Play launching in June, leading retailers to hold off on pushing existing product lines.

Humax currently accounts for 45% of the DVR retail market by volume and over half by value, said Gabriel. The company has longer term plans to extend its presence to smart home products, several of which were shown at IBC last month.

Humax is launching three versions of its Freeview Play box, the FVP-4000T: a 500GB DVR for £199.99, a 1TB box for £229.99 and a yet-to-be launched 3TB device for £299.99. The devices come equipped with three tuners to record multiple channels, WiFi connectivity and DLNA, allowing users to show home media on the TV and stream live channels to another device within the home network.

Apps on the device include YouTube, with Netflix expected to become available in due course, with other apps to follow.

Humax will continue to provide boxes compatible with the rival YouView service at retail, and both will be offered to consumers as options.