Two thirds of US adults now use social media 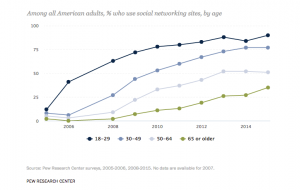 Some 65% of American adults now use social networking services, up from just 7% in 2005, according to the Pew Research Center.

While people in this age group have “always been the most likely users of social media by a considerable margin,” this growth marks 78-percentage point increase, according to Pew.

While usage among young adults started to level off as early as 2010, since then there has been a surge in usership among those 65 and older,” said the  Pew Research Centre.

The report said that women and men use social media at similar rates, that there aren’t notable differences by racial or ethnic group and that people with “higher education levels” are more likely to be social media users.