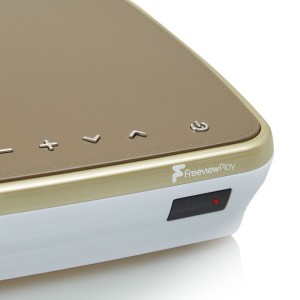 The box currently gives access to cartch-up services including BBC iPlayer, ITV Player, All 4 and Demand 5, while a recent agreement between Humax and Netflix should also see Netflix available on the FVP-4000T models in early 2016.

The device is powered by the Opera Devices SDK and has three tuners for recording functionality, with a choice of 500GB or 1TB hard drives for up to 300 hours or 600 hours of programme storage space, respectively.

Graham North, commercial director, Humax, said: “The new FVP-4000T range for Freeview Play gives viewers the options they want from a TV service, whether that’s on-demand viewing, scrolling back the TV guide to catch up on missed shows, playing back recordings or watching live TV. By combining seamless wireless connectivity with the advanced features of the Freeview Play service into one box, Humax continues to lead the UK’s subscription-free set-top box market.”

Guy North, managing director, Freeview commented: “We believe that Freeview Play is set to become the new normal way of watching TV and it’s great news that with this launch Humax is giving even more viewers the opportunity to experience it.”