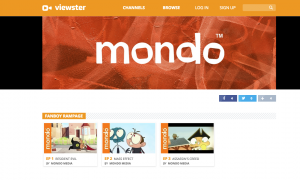 Launch partners for the offering are three prominent YouTube producers: Mondo Media, which makes animations targeted at teens and young adults; AllTime10s, which makes ‘top 10’ videos; and How It Should Have Ended, a parody animation series that makes alternate endings to popular movies.

“Digital-first content, as we are now proud to offer in our Branded Channels, is an exciting window into the future of entertainment,” said Azadeh Stoelken, director of content at Viewster.

“We picked these amazing channels to complement our existing anime, science fiction and thriller offerings for our discerning and engaged audience.”

The short-form content channels will all be available for free through  Viewster’s ad-supported desktop, mobile and smart TV apps.

Switzerland-based Viewster originally starting out as business-to-business video aggregator for companies like Netflix and Hulu. The firm launched a consumer VoD platform in 2010, and has now put a focus on anime content.

Tags: AllTime10s, How It Should Have Ended, Mondo Media, Viewster, YouTube