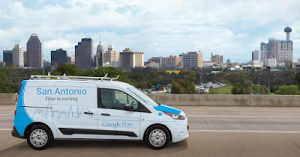 Google is due to roll out its fibre broadband initiative in San Antonio, Texas – it’s largest Google Fiber city to date.

Announcing the move, Google said it will soon enter the design phase of building out the fibre network in the city, which it claims has 1.4 million residents and “one of the biggest and fastest growing cities in the country.”

“We’ll work closely with city leaders over the next several months to plan the layout of over 4,000 miles of fibre-optic cables—enough to stretch to Canada and back—across the metro area. This is no small task, and it will take some time, but we can’t wait to get started,” said Mark Strama, head of Google Fiber, Texas.

Google was previously exploring whether to launch in San Antonio, Phoenix, Portland, and San Jose.