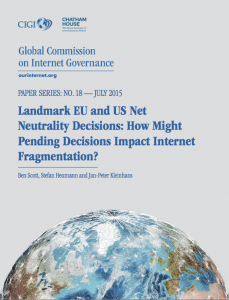 A significant divergence of neutrality rules in the US and the European Union could impact on the EU’s competitiveness with US internet industries, according to a new report.

It also warned that a “weak net neutrality rule” in Europe could lead to a divergence of web customer experience between the US and EU, and that “discriminatory interconnection practices” could be used to undermine the global marketplace of web information and services.

“The net neutrality debate is much more than an arcane technology policy decision for communications regulators. The choices that nations make will determine not only the architecture and market structure of their own information systems – including mass media, digital commerce and personal communications – it will also determine whether the global internet will remain an information commons or fracture into a set of national or regional political economies,” said the report.

“The implications for the transatlantic digital marketplace are significant and could lead to different forms of regional fragmentation.”