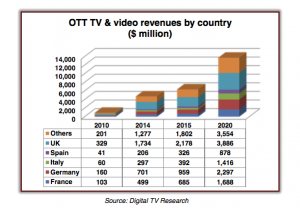 Over-the-top television and video revenues in western Europe will hit US$13.72 billion in 2020, according to Digital TV Research.

The figure is expected to be reached in five years as uptake on on-demand and OTT services roll out across 15 western European countries.

This compares with the US$894 million recorded in 2010 and the US$6.34 billion expected this year.

Furthermore, 32.2% of the region’s TV households will subscribe to an SVOD package by 2020, up from 9% by end-2014. Penetration in the Nordic region will “notably higher” than others, according to Digital TV Research.

However, four of the five largest western European countries – France, Germany, Italy and Spain – will see penetration below 30%.