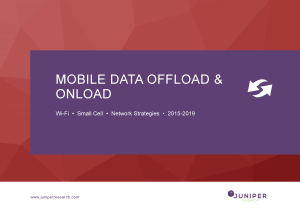 WiFi networks will carry almost 60% of smartphone and tablet data traffic by 2019, after experiencing an almost fourfold increase in use, according to Juniper Research.

The new report claims that WiFi networks will carry less than 30,000 Petabytes (PB) of traffic this year, with this figure rising to more than 115,000PB by 2019 – the equivalent of over 6 billion Blu-ray movies.

“Mobile data offload, [data migration from a mobile network to a Wi-Fi network], offers several key benefits to industry stakeholders. Offload not only addresses the issue of patchy coverage, but also has the potential for the creation of new services such as VoWiFi (WiFi calling) and to increase the usage of existing 3G/4G services,” said Juniper Research.

However, the firm said that WiFi offload brings challenges to operators in terms of effective deployment and return on investment.

The forecast claims that total global mobile data traffic from devices including smartphones, feature phones and tablets will exceed 197,000PB in 2019.

This year, Juniper predicts global smartphone data consumption will be nearly twice that of tablet traffic in 2015.

The GSMA claims that more spectrum is needed by the mobile industry in the UHF band to meet rising data demands. However, the EBU, which represents the interests of public broadcasters in Europe, supports an EU recommendation that access to spectrum below 700 MHz should be safeguarded for digital terrestrial television use.