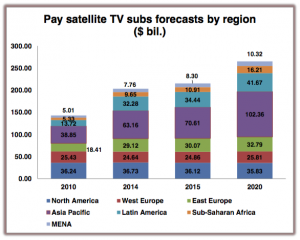 Growth in emerging markets will help push the number of satellite pay TV homes globally up by over 60 million between now and 2020, according to a report by Digital TV Research.

According to Digital TV Research, satellite pay TV homes will grow to 265 million by 2020, up from 203 million at the end of last year. Four countries – India, the US, Russia and Brazil – will account for over half the total. India will continue to lead the sector with 66.9 million pay satellite homes by 2020, followed by the US with 34.1 million, Russia with 18.5 million and Brazil with 15.3 million.

According to Digital TV Research, total pay TV satellite subscribers will double in 41 countries and will fall in 17 through migration to other platforms. Globally, penetration will grow to 15.6%, up from 13.1% today. Twenty-seven countries will have penetration in excess of 25%, up from 11 in 2010.

In terms of revenues, satellite is expected to overtake cable revenues this year, rising from US$88.4 billion in 2014 to US$94.8 billion in 2020. While revenues will rise in the Asia Pacific region and sub-Saharan Africa, they will fall in western Europe and North America. The US’s share of the total will fall from 44.8% in 2014 to 41.3% by 2020. Brazil will be in number two slot, with revenues of US$6.8 billion, while India will move from number 10 to number five slot in terms of satellite pay TV revenues, adding US$2.5 billion.