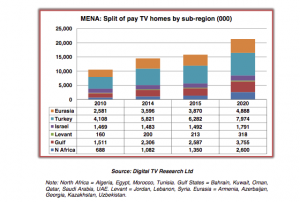 The number of pay TV homes in the Middle East and North Africa (MENA) will reach 21.3 million in 2020, doubling over the ten-year period from 2010 to 2020, according to new research.

The Digital TV Research report claims that 18% of TV households in the MENA region legitimately paid for TV signals by the end of 2014, with this proportion due to climb to 24% by 2020.

Turkey will account for 37% of the region’s total pay TV homes in 2020, according to the study.

“Piracy remains a major problem, despite many efforts to eradicate it. There are 34.3 million free-to-air satellite TV homes in the Middle East and North Africa sub-regions [excluding Israel, Turkey and Eurasia]. We estimate that at least 10% of these homes also receive pirated premium satellite TV signals. This represents considerable revenue loss to the legitimate players,” said Simon Murray, principal analyst at Digital TV Research.

Satellite will continue to account for most pay TV revenues in the region, generating US$3.76 billion, or two-thirds of the 2020 total. Turkey, followed by Saudi Arabia, will contribute the most towards these revenues.

Digital TV Research predicts there will be 6.16 million legitimate IPTV subscribers across the MENA region by 2020 – triple the 2014 total.