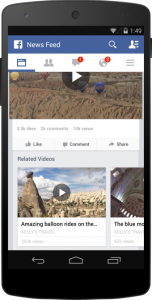 Facebook has reported an increasing shift towards visual content, claiming that in the past year the number of video posts per person has increased 75% globally and 94% in the US.

On a worldwide basis, Facebook said that the amount of video from people and brands in the site’s news feed has increased by a factor of 3.6 year-on-year.

On average, more than half the people who use Facebook every day in the US watch at least one video daily, while 76% of people in the US who use Facebook say they tend to discover the videos they watch on Facebook, according to the social network’s stats.

Since June 2014, Facebook claims it has averaged more than one billion video views every day. Last September, the social site also said that more than 65% of its video views come from mobile devices.

Giving advice to content creators, Facebook said: “With the launch of auto-play and the surge in mobile use, it’s important to focus on posting videos that grab people from the first frame of video.

“Whether you’re a journalist in the field or a public figure sharing a part of your life, post raw videos that are compelling, shareable, clips that no one else will have.”